Posted on Last updated: July 8, 2021 Categories Things To Do

13 Amazing Things to do at Lake Minnewanka, Banff

Lake Minnewanka is one of Banff’s most popular attractions, not only because of its beauty, but for the wide variety of activities available. From a simple lakeside picnic or scenic boat cruise to more active pursuits such as hiking, mountain biking and even scuba diving, there are so many things to do at Lake Minnewanka, Banff.

Things to do at Lake Minnewanka, Banff National Park

Lake Minnewanka has two massive parking lots – one for regular cars and one for RVs and trailers. Despite the large amount of free parking available at Lake Minnewanka, due to the overwhelming popularity of this beautiful Banff lake, it can fill up fast on weekends and holidays. If you want to increase your odds of getting a parking spot at Lake Minnewanka, arrive early in the day and avoid the peak mid-day hours if possible.

It’s easy to take public transportation to Lake Minnewanka. The Roam Route #6 bus travels from the Town of Banff to the Lake Minnewanka parking lot. Learn more about the Banff Roam bus in Getting Around Banff Without a Car.

The Lake Minnewanka Loop is a very scenic & popular cycling route in Banff National Park. It’s an easy 3km ride along the Rocky Mountain Legacy Trail from the Town of Banff to the Cascade Ponds Connector, which is at the beginning of the Minnewanka Loop.

From Cascade Ponds, it’s a 6km ride to the Lake Minnewanka parking lot. Cycling to Lake Minnewanka is a great option if you want to see a little more of this beautiful corner of Banff National Park while getting some bonus exercise.

13 Things to do at Lake Minnewanka, Banff

One of the best things to do at this beautiful picnic spot in Banff National Park is to take a scenic 1-hour Lake Minnewanka cruise. A popular sightseeing option at Lake Minnewanka for over 100 years, the Minnewanka Lake cruise takes visitors on a very scenic, fun and informative journey on the water.

The distinctive turquoise colored Lake Minnewanka cruise boats have large windows enabling everyone on board to get an excellent view of the surrounding Canadian Rocky Mountains. Enjoy learning about the early settlers around Lake Minnewanka and the submerged town of Minnewanka Landing beneath the water while everyone keeps an eye open for a bear along the shoreline.

2. Have a Picnic at Lake Minnewanka

If you are considering having a picnic in Banff, there are few picnic spots in Banff more scenic than Lake Minnewanka. With over 25 picnic tables scattered throughout the Lake Minnewanka day use area, there’s a spot which will make everyone happy. Some have wonderful lake views, while some are tucked away in the trees. Due to the popularity of Lake Minnewanka, we recommend you arrive early to secure a table or bring a picnic blanket as a back-up.

An easy 8km walk, the Stewart Canyon hike follows the shoreline of Lake Minnewanka until it leaves to follow the Cascade River through a lush forest. In late spring, this is one of the best locations to see the beautiful, delicate Calypso Orchids growing in the dappled sunlight.

If you’d prefer to stay along the shores of the beautiful Banff lake, another very popular Lake Minnewanka hiking trail is the area’s signature hike, the Lake Minnewanka Trail.

The Lake Minnewanka trail is one of those unique hikes where you can literally hike for as long as you want. From the day use area, the Lake Minnewanka hike follows the lakeshore for 32km until you reach Devil’s Gap.

Please be advised that Lake Minnewanka is on the edge of one of the core areas in Banff National Park for grizzly bears. There is a seasonal trail restriction in place each year from mid-July to mid-September which requires hikers to hike in tight groups of 4 or larger and carry bear spray.

It goes without saying that having bear spray in a readily accessible bear spray holster is a must for hiking the Minnewanka Trail.

The Alymer Lookout Trail is a short, steep hike straight up the slopes of Mount Alymer. The payoff for your efforts on this difficult Banff hike is one of the most beautiful spots in all of Banff – literally. We do not say this lightly – the views from the Alymer Lookout are incredible!

There’s nothing quite like being out on the water in the middle of a beautiful glacial lake in Banff National Park. Whether you love to fish or to simply sit back and soak in the world-class Banff scenery all around, getting a Lake Minnewanka boat rental is an experience you’ll remember.

Be sure to ask about the wind forecast before venturing too far. If the wind is blowing hard, the water can get pretty choppy on a lake as large as Lake Minnewanka. The boathouse will have some advice on how to safely deal with a windy day for your boat rental.

SUP enthusiasts can bring their boards to Minnewanka, but to be honest, there are better lakes for stand-up paddle boarding in Banff than Lake Minnewanka. If you choose to paddle board at Lake Minnewanka, you’ll need to contend with motorized watercraft (the only lake in Banff where this is an issue) and the potential for strong winds and big waves.

Due to the near-freezing water temperature, the risk of hypothermia is significant. Always wear a flotation device and if possible, don’t go alone.

That said, the scenery is a big pull for people to want to SUP on Lake Minnewanka, so we recommend you stay close to the shores of Lake Minnewanka unless you are an experienced paddler.

Like many places in Banff National Park in the summer, the free Lake Minnewanka parking lot fills up fast. Getting there early is your best bet for a day of paddle boarding on Lake Minnewanka.

Please help stop the spread of invasive species in Banff National Park by cleaning, draining and drying your paddleboard before and after you SUP on Lake Minnewanka.

As of June 2021, Banff National Park requires a Self-Certification Permit for any non-motorized watercraft, fishing equipment and aquatic recreational equipment.

All of the same pros and cons mentioned in the paddle boarding section apply to kayaking at Lake Minnewanka. Although a sleek kayak will have a much better chance dealing with a windy day than a stand-up paddle board, you’ll still need to be cognizant of motor boats and scenic tour boats while you are on Lake Minnewanka kayaking.

In addition to the extremely smart trophy-sized Lake Trout, Lake Minnewanka is also home to home to Rocky Mountain Whitefish.

If you wish to go fishing on Lake Minnewanka between late May and early September, you can bring your own boat, rent a motorboat or hire a Lake Minnewanka fishing charter.

Remember those smart trout I talked about? Well, if you want a good chance of outsmarting them and actually catching some fish on Lake Minnewanka, consider hiring a fishing charter. They are a bit pricey, but having an experienced local guide can make all the difference. Try Banff Fishing Unlimited or the Banff Jasper Collection for guided Lake Minnewanka fishing trips.

People who wish to enjoy Lake Minnewanka fishing must adhere to a host of national park regulations. Rather than paraphrase the rules for fishing in Banff, we encourage you to read them on the Parks Canada fishing information page.

When most people think of scuba diving, they imagine coral reefs in a far-flung tropical destination. But, you may be surprised to know that thousands of people go scuba diving at Lake Minnewanka every year!

Scuba diving Minnewanka Lake is a cold-water, high altitude activity and has a host of risks associated with it. Please read the Banff scuba diving regulations and safety tips.

The Lake Minnewanka Trail is rated a Black Diamond (difficult) trail by Parks Canada. It has a few steep sections, but I expect the black diamond rating comes from the distance as well as the many sections of trail with challenging surfaces, such as shale rock fields, etc.

If you mountain bike the Lake Minnewanka trail during the permitted periods in spring and fall, target early morning, weekday departures to get the best experience.

11. Sit on the Red Adirondack Chairs

Parks Canada has placed iconic red Adirondack chairs at incredibly scenic national park locations across Canada. As you’d expect, there are many locations to find red chairs within Banff, including Lake Minnewanka.

Lake Minnewanka is one of the best spots in Banff to view wildlife. Nature is wonderfully unpredictable, but we’ve seen tons of Banff wildlife at Lake Minnewanka, including deer, elk and bighorn sheep. Perhaps the most exciting wildlife sighting at Lake Minnewanka comes from a mother fox who has created a den for her kits the past few years.

Increase your odds of a sighting with these tips for spotting Banff wildlife from a local wildlife photographer.

If the conditions are just right, for a few magical weeks in early winter the lakes in Banff freeze over before they are covered with snow. Once the ice is thick enough, it creates a rare opportunity to go wild ice skating in Banff National Park.

Wild ice skating is a hugely popular thing to do in Banff in winter. Due to its size, Lake Minnewanka is often the last lake in Banff to freeze over, which often gives skaters one last chance to go wild ice skating each year.

Being out on the lake means there are no trees to block the spectacular views of the surrounding Rocky Mountain peaks.

Lake Minnewanka has approximately 25 picnic tables scattered around the day use area. Many of the picnic tables have good lake views, but some are tucked away in the shade of the evergreen forest or in a pleasant picnic area with a grass lawn.

There is a large eco-friendly building with toilets in-between the two large Lake Minnewanka parking lots. There’s another set of toilets towards the end of the Lake Minnewanka day use area, near the Stewart Canyon hike trailhead.

If Lake Minnewanka has a sandy beach, we’ve yet to find it. Kids don’t mind though as the shoreline of Lake Minnewanka is filled with rocks perfect for kids to chuck into the icy waters. Most kids will throw rocks into the water for hours if you let them.

For those who ride their bikes to Lake Minnewanka, there are bike racks to lock up your bike. Don’t forget your bike lock!

The closest campgrounds to Lake Minnewanka for car camping or RVs are:

Competition for campsites in Banff National Park can be quite fierce. If you are unable to get a campground, consider a stay at one of these inexpensive Banff hotels. If you’d like to treat yourself, a stay at the Fairmont Banff Springs Hotel is a once-in-a-lifetime experience.

We hope you enjoy these amazing things to do at Lake Minnewanka, Banff.

Other Things to do in Banff in Summer

Planning a Trip to Banff 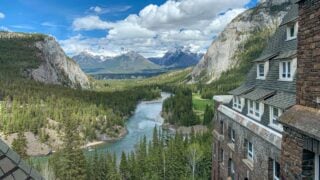 Previous
70 Reasons to Stay at the Banff Springs Hotel 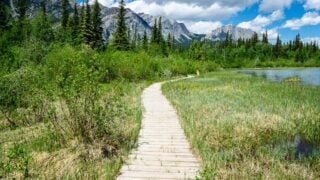 Next
Many Springs Interpretive Trail in Kananaskis