Posted on Last updated: January 14, 2022 Categories Getting There

Getting Around Banff Without a Car

So, do you need a car in Banff?

Built in a charming rustic, mountain village style, getting around Banff Town by walking is a pleasure to walk around. You’ll love enjoying the views of the surrounding majestic mountains while strolling along historic Banff Avenue.

If you can take your eyes off the mountains long enough, you’ll be treated to fun & enticing window displays from the local merchants and restaurants. The mountain candy and chocolatier shops are especially hard to pass by without going in, especially if visiting Banff with kids!

You’ll appreciate how compact the Town of Banff is. The main commercial area of Banff Avenue, which runs from the Bow River (near Buffalo Street) to Moose Street, is a mere 0.9km long. It’ll only take you approximately 10 minutes to walk from end-to-end, but chances are you’ll find many reasons to stop along the way!

Many of the things to do in Banff are found in the town centre and are easily reachable by foot including the Whyte Museum of the Canadian Rockies, the Banff Park Museum, Central Park and the Banff Visitor Centre.

Getting Around Banff by Bus

Don’t think that you’ll be stuck in town if you come to Banff without a car. The Roam Public Transit system makes it easy getting around Banff National Park without a car. You don’t even need to carry a pile of loonies ($1 coins) in your pocket, simply download their app and pay for your Roam fares on your phone.

Lake Louise is a magical place within Banff National Park, but it’s 59km away from the Town of Banff. Wondering how to get from Banff to Lake Louise without a car? Easy… Roam route 8X will get you there. The Roam bus to Lake Louise has stops near the Chateau Lake Louise and the Lake Louise Village.

Parking at Lake Louise is typically at a premium, so even if you have a rental car, you should consider taking the Lake Louise bus from Banff.

There are also three seasonal routes operated by Roam which are excellent for Banff sightseeing:

There are many excellent Banff sightseeing options available on the Lake Minnewanka bus.

Johnston Canyon is one of Banff’s most fun & popular hikes and it’s possible to get from Banff to Johnston Canyon by bus with Roam Route 9. This route is seasonal and runs mid-June to mid-September. Check the Johnston Canyon bus page for current service details.

A turquoise green-blue lake surrounded by towering mountains; Moraine Lake is another must-see Banff attraction. Its popularity makes it difficult to get a parking spot, so taking a bus from Banff to Moraine Lake makes a lot of sense.

This route is seasonal and runs late September to mid-October. Check the Moraine Lake bus page for current service details.

There are also two Roam routes which are more geared towards residents of Canmore and Banff:

Canmore is a town that resides just outside the gates of Banff National Park. Roam Route 3 is simply the bus from Canmore to Banff (and vice-versa of course). This is a functional regional bus which doesn’t offer much sightseeing aside from the Banff train station and downtown Canmore.

If you’d like to see many of Banff National Park’s natural attractions in a single day, take a look at the HopOn Banff bus. With a single day ticket, you can visit Johnston Canyon, Lake Louise gondola, Lake Louise village, Chateau Lake Louise and Moraine Lake.

Uber doesn’t currently operate in Banff, but there are taxi services available for short local trips, sightseeing tours and even transfers to the Calgary airport.

Getting from Calgary to Banff Without a Car

Looking for a convenient Banff hotel if you don’t have a car? Find one that is right for you in The Best Banff Hotels for Visiting Without a Car.

Previous
6 Ways to Get to Banff National Park 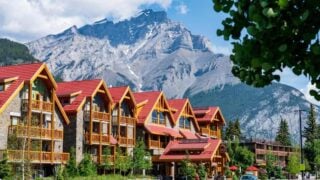 Next
The Best Banff Hotels for Visiting Without a Car