Posted on Last updated: June 11, 2021 Categories Where To Stay

This collection of Banff Springs Hotel pictures are primarily from Banff postcards from the 1900s to the 1940s. We have presented them by decade. Best efforts have been made to present accurate dates for these historical Banff Springs Hotel images, but in most cases the actual date cannot be 100% verified.

Book your stay at the Banff Springs Hotel today!

On back of postcard:

“The Banff Hotel, owned and operated by the Canadian Pacific Railway, is located at Banff in the Canadian Rockies. It is the head quarters of the Canadian National Park, an area of 5,732 square miles, embracing parts of the Bow, Spray and Cascade Rivers, Lake Minnewanka [sic] and several magnificent mountain ranges. It is the largest park in the world, being nearly half as large again as the famous Yellowstone Park.”

70 Reasons to Stay at the Fairmont Banff Springs Hotel

Disaster struck the Banff Springs Hotel in March 1926, when a massive fire destroyed much of the beloved Banff hotel. Repairs were conducted with remarkable speed and the hotel reopened in phases between July 1926 and 1928. The final 1920’s Banff Springs Hotel image showcases the new fire resistant hotel constructed from steel, concrete and stone.

“Had a long run through the Prairies on Monday between Winnipeg & the Rockies.

Dear Tom: Arrived here Tuesday morning 8:45, staying here for a few days. This is in the Canadian Rocky Mountains & the most lovely spot we have yet struck. Mountains all round the Hotel & snow is on them all the year round. Ma & I have had a lovely swim in the sulphur pool this afternoon. This pool is filled by a warm spring. It was snowing here this morning.
Pa “

“Dear folks: Fun and frolic. Please try and come out on Sunday cause I’m lonely, miserable, and sick, but having fun. Deep in planning stunts with kids, church services with leaders. [?] new potatoes. Up to now, good meals but insufficient. Last night it poured and wouldn’t [?] … everyone had diarrhea (I think) except me. [Anne?]“

A Castle in the Wilderness: The Story of the Banff Springs Hotel

With the onset of World War II, international tourism dropped, impacting the Banff Springs Hotel. The hotel closed its doors from 1942 to 1945 to support the war effort.

“Hello [?], We are here in Banff for the night. Cool today and quite chilly tonight – raining every other [?]. Wonderful mountains all around. We leave tomorrow for a motor trip to Lake Louise & will get back on the train tomorrow night. Hope you are ok. Love Elianior”

Top Banff Springs Hotel Deal
Are you an Albertan looking for a staycation in the Rocky Mountains? The Banff Springs Alberta resident rate offers locals up to a 30% discount on room rates!

Not from Alberta? See even more Banff Springs Hotel deals.

The historical Banff Springs Hotel images within this collection of photos were sourced from the Internet Archive. Every effort has been taken to ensure copyright law has been respected. If you have a copyright concern, please contact us at info [at] travelbanffcanada.com with details.

More About the Fairmont Banff Springs 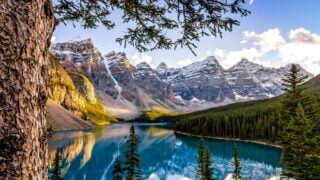 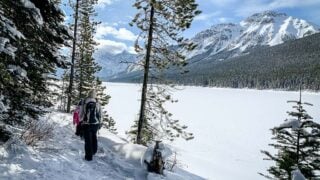