Posted on Last updated: June 11, 2021 Categories Where To Stay

Banff National Park is known to be an expensive destination and for many, it’s a trip of a lifetime. A trip that takes years to save up for. We recognize that visiting Banff on a budget is important to many, which is why we were thrilled to spend a few nights in the Dorothy Motel – one of Banff’s best cheap hotels.

Let’s be honest, the terms motel and cheap accommodation in Banff don’t necessarily conjure up the same image of a luxurious stay at the Banff Springs Hotel that we all wish we could have when visiting Banff. Visitors need not worry about that when staying at the Dorothy Motel.

Two nights prior to staying at the Dorothy Motel, we stayed at the Fairmont Banff Springs Hotel. After a stay at a luxury Banff hotel, we were curious how our stay at the newest motel in Banff would compare.

Located on the former site of Banff’s Bumpers Inn, the Dorothy Motel is Banff’s first boutique motel. The Dorothy Motel was inspired by the strong spirit of the Bow Valley’s pioneering women, such as Dorothy Carleton, Mary Schäffer, Mary Vaux and Sharon Wood. In addition to those trailblazing women, it recognizes women who are pushing the limits and moms who are raising children to also adventure in the mountains.

Book Your Stay at the Dorothy Motel

One of the reasons why the Dorothy Motel is more affordable than typical Banff accommodations is that it is on the very eastern edge of Banff Avenue. It’s a quiet location situated right next to the forest.

Despite not being in the heart of the Banff townsite, most visitors to Banff won’t have an issue with the location being further out.

What are the Rooms Like at the Dorothy Motel

The first thing we noticed about the rooms at the Dorothy Motel is the funky floors. The linoleum floor tiles make you feel like you are walking on a forest. It’s a nice change to the standard, boring industrial carpet found in most hotel rooms. As parents, it was nice not to worry about our kids spilling anything on the floors.

The queen-sized beds at the Dorothy Motel were soft, but not too soft. We all enjoyed good night sleep during our two-night stay. Each bed was fitted with 4 pillows and a very warm comforter. Each side of the bed has a small, adjustable reading lamp.

As parents traveling with kids, staying organized is key to getting out for the day. The storage in our room at the Dorothy Motel was highly functional and well thought out. There’s a nicely sized 6-drawer dresser underneath a flat-screen TV.

There’s a shelving unit near the front door with 4 small shelves, one medium shelf and a long shelf up top. There’s room for shoe storage underneath this unit. Finally, there’s a shared nightstand between the two queen-sized beds, with a conveniently placed outlet for charging phones overnight.

We really don’t enjoy eating three meals a day at restaurants when we travel, so we self-cater quite a few meals. We appreciated the small table and two chairs in our room for our kids to eat at.

When the weather was good, we ate our meals outside at one of the many tables in the inner courtyard. Having this additional space at the end of the day to relax outside, with mountain views peaking over the roof of the motel, was exactly what we needed.

We were able to store a reasonable amount of groceries in our small in-room fridge, which was underneath the microwave. Sitting atop the microwave was a hot water kettle, a coffee maker and some really nice Dorothy Motel coffee mugs. We always appreciate a nice big cup of coffee in the morning!

Speaking of the courtyard, our room at the Dorothy Motel had a second door leading to the courtyard as well as a large window looking onto it. The window and back door each had two sets of roller blinds on them, one for privacy and one for darkness.

Stay comfortable in your room at this boutique Banff motel with a modern climate control panel. We liked how you simply set the ideal room temperature and the room would either run the heater or the air conditioner as needed. There was no need to switch between heating and cooling mode.

The bathroom in our room at the Dorothy Motel had a large shower with a funky, sliding glass door. The complimentary toiletries are from a favorite local supplier, Rocky Mountain Soap. The foaming hand soap, lotion and bodywash were all our favorite lemongrass scent.

Those traveling with pets will also find comfort at the Dorothy Motel. They have pet friendly rooms and will provide pet bed, water and food bowls, take home toy and special treats.

We’ve stayed at motels with dogs before and these extra amenities for travelers with pets makes it so much more convenient! Not to mention the easy access directly outside and the forest nearby. This shouldn’t scare off people with allergies though as not all rooms accommodate pets.

Amenities at the Dorothy Motel in Banff

Considering the Dorothy Motel is one of the most affordable places to stay in Banff, it has a surprising number of useful amenities for guests.

The Legacy Trail Near the Dorothy Motel

One of the best reasons to stay at the Dorothy Motel is its proximity to the Banff trailhead for the Legacy Trail. For those who may not be familiar with the Legacy Trail, it is a very popular, fully paved bike path between the Town of Banff and Canmore.

There isn’t an official parking lot for the Legacy Trail in Banff and the parking lot on the Canmore end fills up quickly, especially on weekends. With tons of cyclist-friendly amenities such as bike storage, repair station and a bike pump, the Dorothy Motel is the perfect place to stay for people who wish to cycle the Legacy Trail.

We brought our bikes to the Dorothy Motel and enjoyed the scenic bike ride to Canmore on our first morning. It was a pleasure not to have to fight for a parking spot in Canmore – we simply unlocked our bikes and we were on the Legacy Trail in under a minute!

Why Stay in Cheap Accommodation in Banff like the Dorothy Motel

In the introduction to this review of the Dorothy Motel, we mentioned that in many ways we liked it better than the Banff Springs Hotel – it’s true. The Dorothy Motel may not be a National Historic Site of Canada with 130 years of history, and it may not have the million-dollar views of the Banff Springs, but it’s a welcome addition to the affordable Banff accommodation scene.

It’s true, we had an incredible view from our room and the Fairmont Banff Springs Hotel is super-fun to explore, but to be honest, when you visit Banff, you’ll be seeing the world-class scenery all day long. You don’t really need it from your hotel room too.

And at approximately 1/3 the price of the Banff Springs Hotel, the Dorothy Motel is a great option for anyone looking for cheap accommodation in Banff.

Book Your Stay at the Dorothy Motel

Things to do in Banff National Park 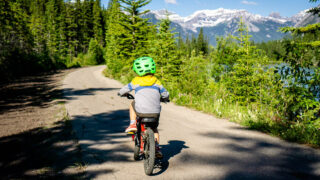 Next
70 Reasons to Stay at the Banff Springs Hotel